4 questions for Christian Joachim, senior researcher at the CNRS and organizer of the NanoCar Race 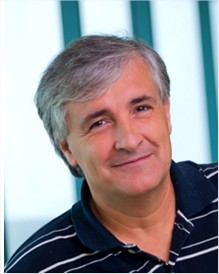 How did you come up with the idea for a molecule-car race?

In 2012, I had to write an article to accompany two scientific papers published in the US journal ACS Nano, one on the molecule-motor, and the other on a molecular car. I tried to make the text more "attractive"... and that's when I had the idea of organizing a NanoCars race! With the green light from Paul Weiss, the journal's editor, the idea began to emerge in the scientific literature. In parallel, Gwénaël Rapenne and I were publishing an article in Nature Nano on a new molecule-motor. I was interviewed at the time by a journalist from Le Monde, who chose the molecular car race as the angle for his article. The enthusiasm surrounding the idea prompted us to organize this race for real. At the same time, we were completing the first scanning tunneling microscope with four tips at the CEMES. And now, three years later, the NanoCar Race is underway for October 2016.

What were the main difficulties you had to face during the organization of the race?

First we had to modify our 4-tip scanning tunneling microscope so that the four drivers could drive their molecular cars in parallel, at the same time and on the same surface. Failing this, there would have been no race! Being able to simultaneously place four NanoCars in the same spot is a major challenge that we are currently meeting. It took a specialized German company three months to build the evaporator that makes this operation possible. Various technical constraints forced us to develop a system of caches to divide the track into four sections, and allocate a zone to each competitor. Finally, since this takes place in an ultra-high vacuum, we designed a mini lift with a carousel to position these caches!

In your opinion, what is the greatest challenge of this race?

First of all its preparation. We have to evaporate at least four different molecular cars on the same gold surface, with evaporation temperatures ranging from 50°C to 300°C, while maintaining the cleanliness of this surface and keeping the teams separate. Then, the primary rule of the race is to drive the NanoCar without touching it mechanically. Since the mid-1990s, we know how to control a molecule at will by "pushing" it through repulsive interactions with the end of the microscope's tip. Today the goal is to try to master inelastic intermolecular phenomena in order to supply energy to a single NanoCar, thereby making it move, all of which without touching it! During the first tests by the German team, it took a few hours for the driver to learn how to control these effects while taking into account the exact position of the gold atoms on the surface, especially in order to negotiate a 45° turn. Moreover, some teams, such as the US-Austrian or Japanese teams, even have a motor in the conventional sense of the word! The tunneling current must move one or more small chemical groups specially designed to gain traction against the gold surface and thereby propel the molecular car in 0.3 nanometer steps, doing so by increasing this tunneling current through brief voltage pulses.

What can happen to the molecule-car during the race?

There are always risks in a car race. The NanoCars in powder form are heated to 300°C, and evaporated on the gold surface. The impact of these very hot molecules on the gold surface could indeed cause them to decompose, or even to resynthesize into other, different molecules. The German team has the opposite problem, as they must reassemble their molecules directly on the track, which could consequently result in failure if it is too hot or unstable. Furthermore, the electric current passing through the molecule, which is generated by small electric pulses of approximately 2 volts, can only propel it by 0.3 nanometers on average. Yet the track is 100 nanometers long! A few hundred of these pulses must thus be generated to complete the race. The molecule's chemical bonds ultimately risk breaking...Finally, some atoms — gold atoms caught by the tip during its successive approaches toward the surface to obtain a tunneling current — could move down the length of the scanning tunneling microscope's tip, which applies these pulses. The resulting modification of the lines of the electrostatic field would then attract molecules onto the tip, making them disappear from the scientists' image field — an unexpected way to go off track!